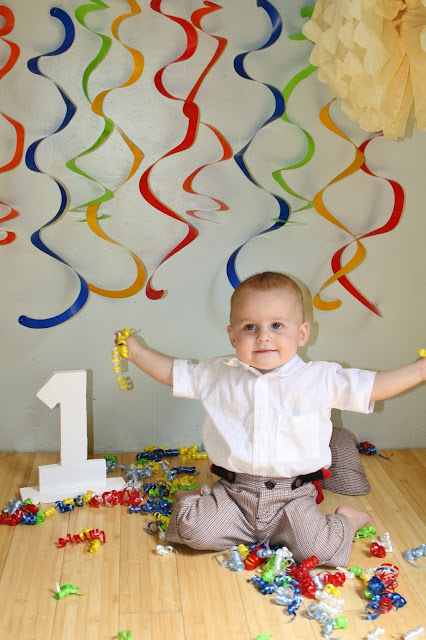 Sunday we had Prince C's 1st Birthday Party! He had a blast! It was so much fun watching his face trying new things. First up was his picture. I love this one, it really shows what he did the whole time I was attempting to get just one good photo of this little guy. All I wanted was just one. 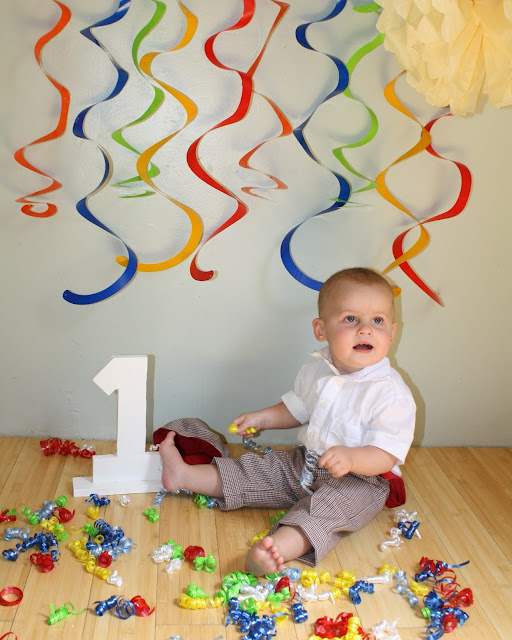 He loved the pom pom hanging from the ceiling. He did try to grab it several times. Many thanks to my older boys for helping with keeping his hands more to the floor. 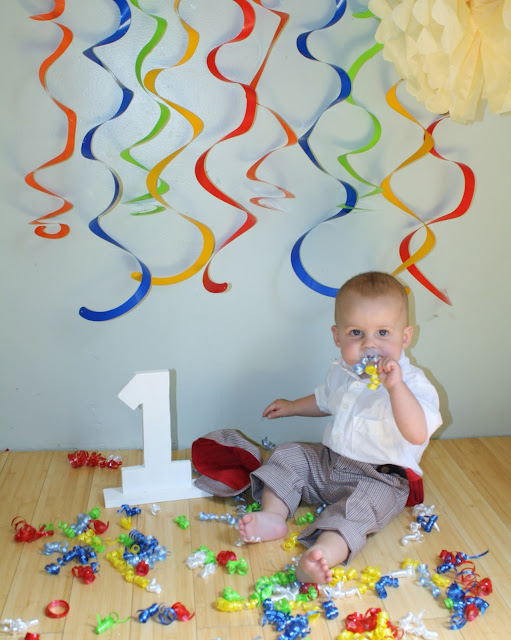 Then he thought that the steamers would be yummy to chew on.... 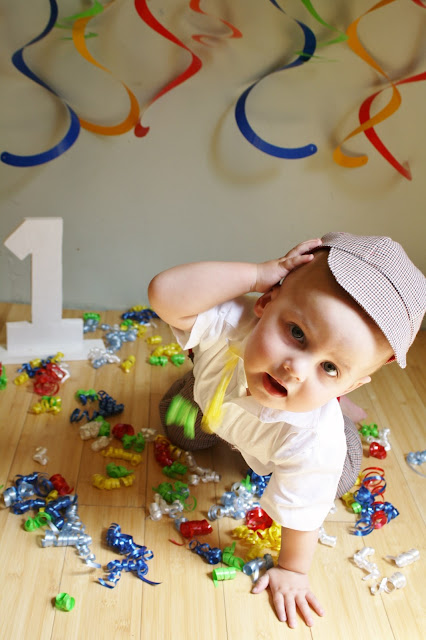 but he didn't think a hat was going on his head, not his head. Oh yah, and the suspenders, didn't happen either. He hated those just as much as the hat. I really loved the little hat. sniff, sniff. 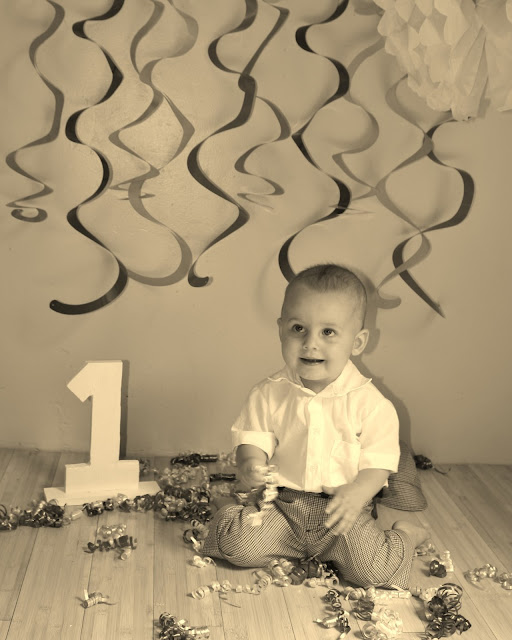 I still think he was just the cutest though. 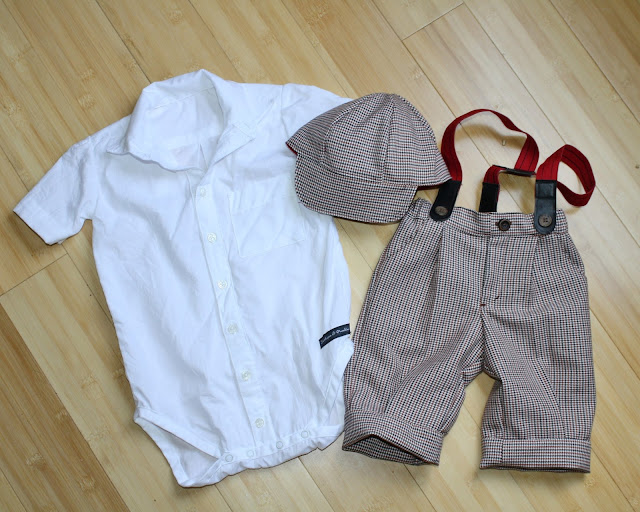 Here is a closer look at his outfit. I used the Oliver + S Sketchbook pattern for his top and knickers. I wanted something vintage looking for him. I just love anything vintage!
The shirt I made into a onesie shirt so it stays tucked in his pants. He is a very wiggly baby boy so this has helped out a ton. He was worn this outfit many times already and I love, love this shirt! I will have to make all his shirts like this from now on. Many thanks to another O+S gal for this great idea!!
The pants I made into knickers. I kept the length the same as the pattern and transferred the pleat from the top onto the bottoms and made a cuff to finish them off. Easy peasy!  For the suspender we already had a pair so all I had to do was sew the buttons onto the waist band. For the button on the pants I sewn in a fake button hole. I love the look of this too.
The hat pattern was my own. It fits him well if he would just leave the thing on his head for two seconds...
Now the fabrics, the shirt in linen and the pants in a suiting, a lovely, soft suiting. I love the feel of it! It was a bit of a pain to sew though. It stretches so easy. 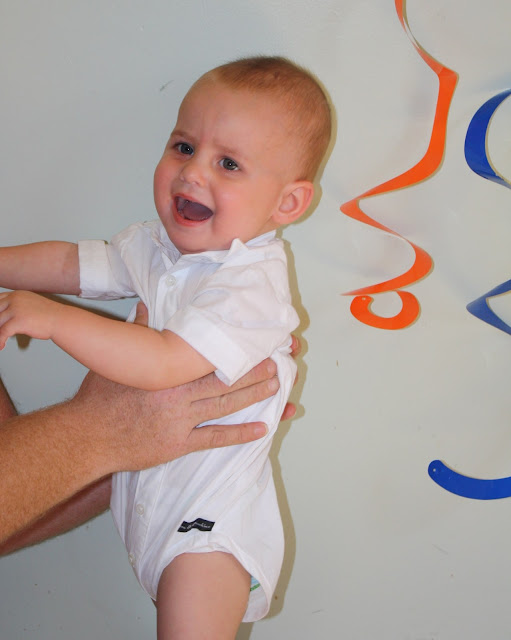 Now little guy was not much into being held this day so this is the best photo I have of the shirt fit. Poor little one, there was too much to get into this day. 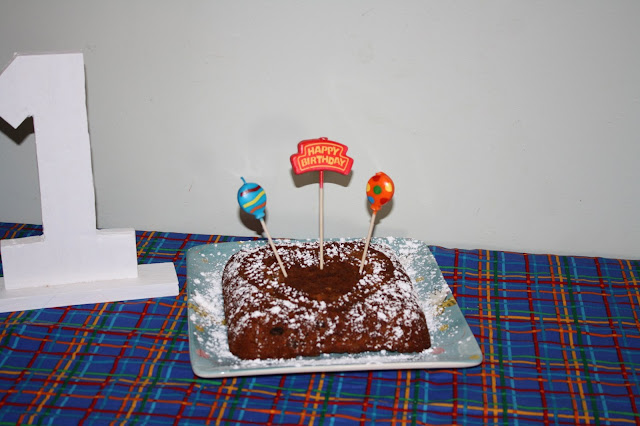 His cake was a  traditional carrot cake, many, many thanks to Sarvi for the recipe!! Our little guy is severely allergic to dairy and this cake not only fit the bill but was very yummy too. 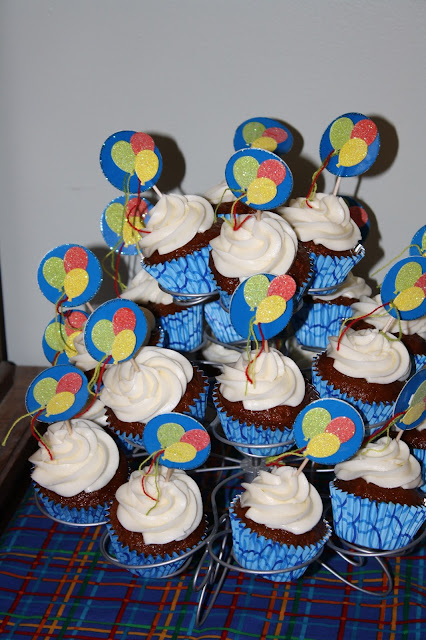 For the cupcakes I did make frosting for the older ones. They said they really needed it. 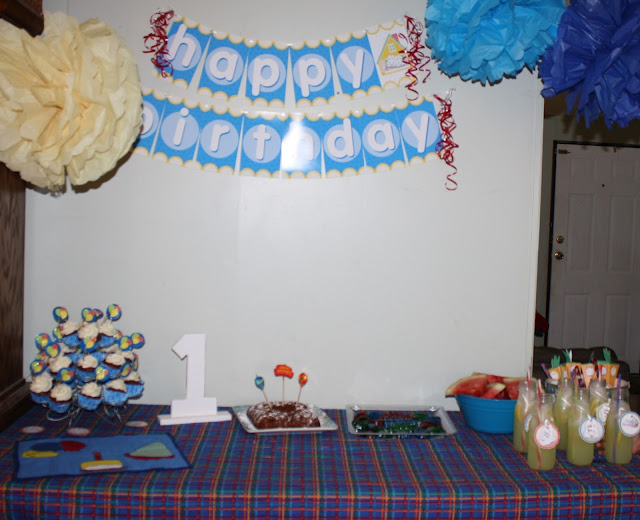 Sweet pea helped with the decoration. I was not really doing a theme but she insisted that he wanted a Max and Ruby. She told me to go to Nick jr on the puter (computer)  and I find party stuff.(her own words!) I am sure she has to see this on the TV. It was not a big deal so I did. She picked out what Prince C wanted. ; ) A p[arty banner and a few party fun things for his guests. 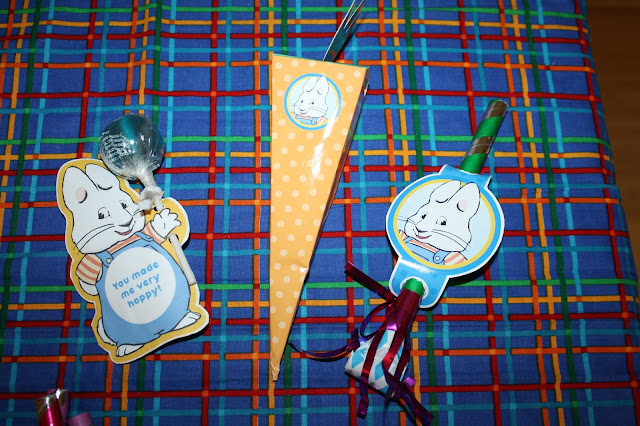 Surely she wasn't thinking about herself here. 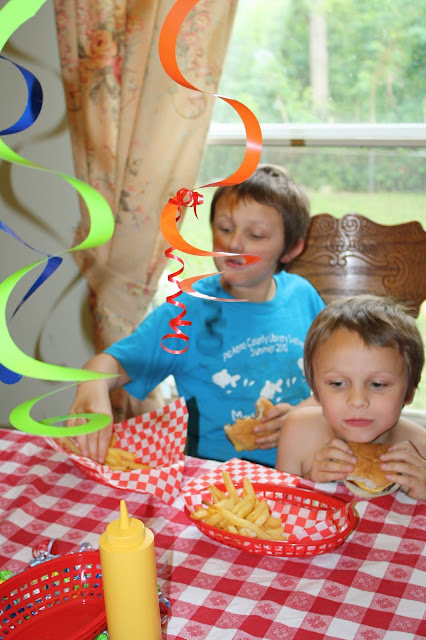 For dinner we had hamburgers and fried, one Prince C's favorites. 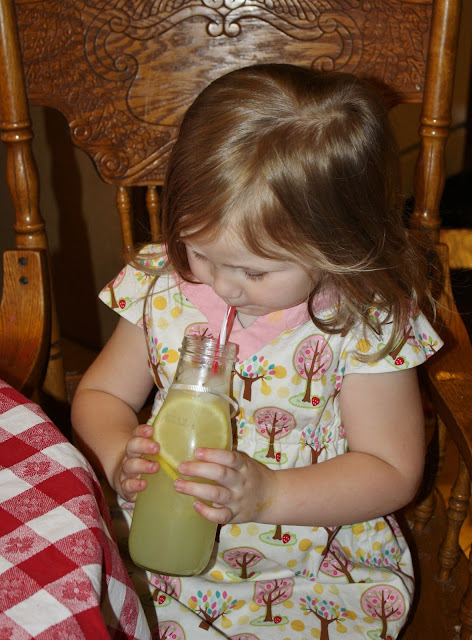 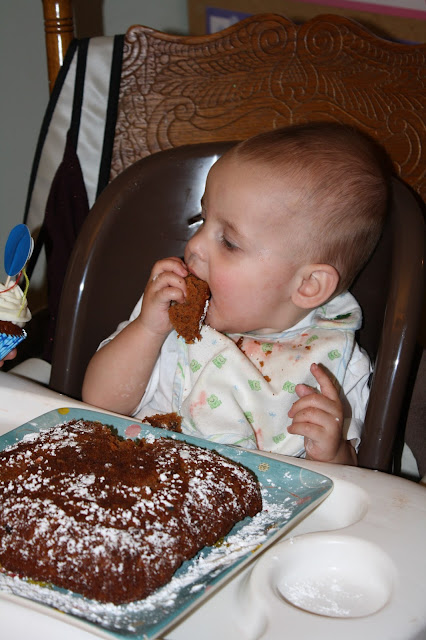 The really fun part of our day was to watch Prince C eat his first
cake. 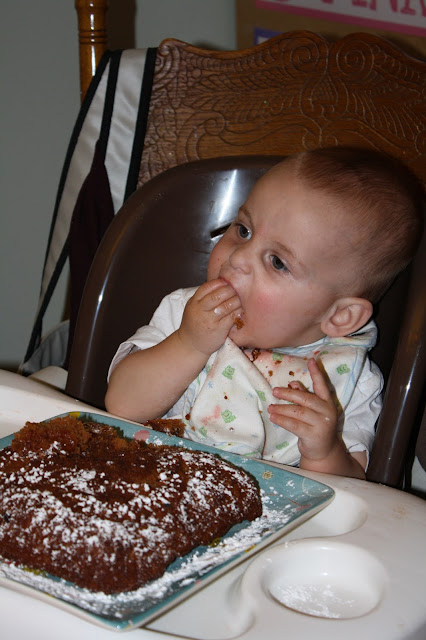 He couldn't get enough of it! He ate a whole corner off the cake before we decided he had enough. I was afraid after eating all those fries and watermelon that it was more than his tummy could handle. 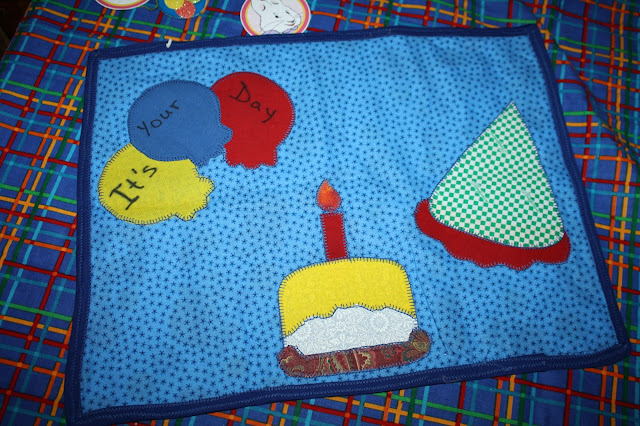 This is the most special gift Prince received for his birthday. My wonderful mom made this for him. I love it and the colors are the same for his party. I do wish I got a photo of him opening this. He spread it out on the floor, got this big grin and decided it was  a pint size yoga mat for him and proceeded to use it as such. I about died laughing at him. I think he has been watching me work out. ; ) 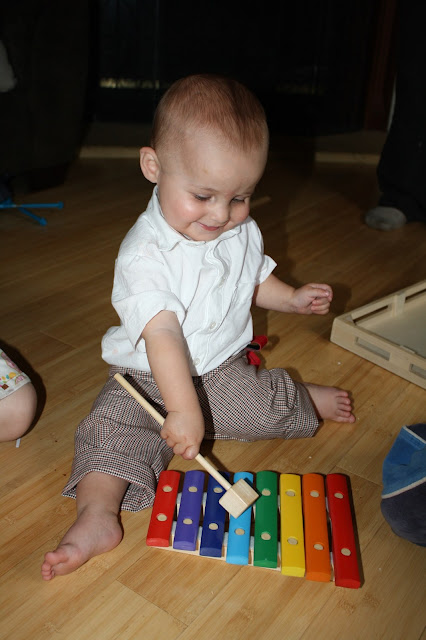 Our whole family had a wonderful day with our special baby boy. 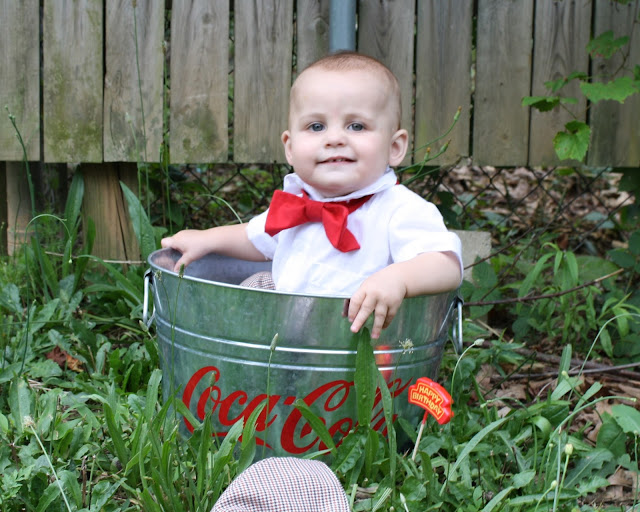 I would love to hear your comments